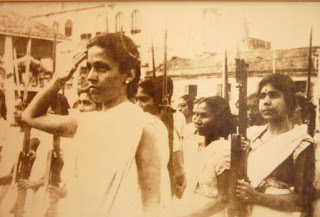 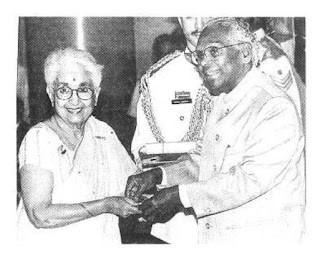 n his assessment of Netaji Subhas Chandra Bose, Ram Manohar Lohia describes Bose as the embodiment of the Haldighati spirit.

Drawing an analogy with Rana Pratap's refusal to accept defeat to the Mughal army, Lohia says Bose accepted neither defeat nor the withdrawal of lassitude. The Haldighati spirit does not believe the world will end with the current generation. It believes that the ultimate source of strength and goodness lies in the power of the will.


But, Lohia writes, how clean, knowing , unselfish and undefeated is this spirit? This description also fits the action-packed life of Bose's close associate in the Indian National Army (INA), Captain Lakshmi Sahgal , who passed away at the age of 97 in Kanpur recently.

Even her last act - to donate her eyes to a needy person and her body to medical students - reflected a radical edge undiminished by age. But how appreciative was Independent India of people like Captain Lakshmi?

Why did she and her comrades who too fought for the country's independence , of course, marching along a path far removed from the highway of the freedom struggle, fail to find space in the political mainstream? Was the refusal of Jawaharlal Nehru and others not to draw in INA associates into public life a conscious political decision that saw the linkages Bose and his political vision shared with the Axis powers as something more than just tactical?

Did they suspect that an active presence of the legacy of Netaji - and the INA - in public life could pose an ideological threat to the fledgling democracy in India? Or was it simply a failure to acknowledge political expressions that challenged the primacy of the Gandhi-led non-violent struggle for freedom?

There's so much to wonder as the last of the INA heroes depart. Captain Lakshmi's life was a series of episodes in heroism, rare even among those who have lived through the tumult of the 20th century. The cosmopolitanism of her political experience itself is exhilarating , even if impulse dominated her actions more than prescient political thinking.

The young, strikingly beautiful doctor from Madras with roots in Kerala belonged to a Congress family, but she did not see any radical potential in the Gandhian idea of peaceful revolution. Non-violence was too passive, non-active for her. She married a person of her own choice and when he couldn't accept her on her terms she left him to sail to Singapore to set up practice with a classmate.

The Indian Independence League drew her into salon politics, but the arrival of Bose in the Japanese sector in the 1940s transformed her into an active political being. She was attracted to his charisma and absolute sincerity, as she was to recollect, and he saw in her a potential leader.

In Singapore , she raised the Rani of Jhansi regiment, a force of 1,000 women soldiers and 200 nurses, and would march with the INA during its ill-fated incursion into Assam, across Malaya and Burma. The INA's foray was in echo of the Quit India call by Gandhi , but it ended in unmitigated disaster for the men and women who were dependent on Japanese forces for material and logistics.

It didn't survive the defeat of the Axis powers in the war and the death of Netaji in an air crash. The captain, then in her early 30s, spent a few months as prisoner of war in Rangoon before being repatriated to India just after the INA trials had ended.

The INA trials were used by the Congress to mobilise people; and the army - then littleknown in India - and the officers became heroes. The euphoria was shortlived . INA veterans discovered they were expected to be trophies to be displayed during Republic Day and Independence Day and not to aspire for an active political career. Perhaps that was not surprising . Nehru was influenced by the anti-fascist European Left.

Bose, who hobnobbed with Hitler and Mussolini, belonged to a discredited political sphere. That Bose may have been blinded by his nationalist zeal in not recognising the threat of fascism would not cut ice. The ideological basis of his politics and methods of mobilisation shared a lot with the Germans, Italians and the Japanese. Also, Nehru could well have been wary of Bose, who once rivalled his popularity as a Congressman and a youth icon.

In short, the political lineage of Bose turned out to be a burden for INA veterans, who were, of course, loved by the public. The Hindu right-wing would have loved to have them on board, but the INA's secular foundations were firm. The communists, who could have been allies of Bose, once a leader of the Left within the Congress, but for his dalliance with the fascists, too took time to separate the spirit that informed the INA and its founder's hazy political vision.

It took two decades after Independence for Captain Lakshmi - by then a people's doctor in Kanpur - to be admitted to the CPM, which, in 2002, fielded her for the President's office. By then the communist parties had reconciled with Bose as well. In 1997, the birth centenary of Bose, EMS Namboothiripad wrote: "Although it was formed and functioned with direct material and moral assistance from the Japanese militarists, the INA was a genuinely national organisation . It was the embodiment of national unity among the various communities of India and had patriotic national symbols." That, surely, is a fair assessment.