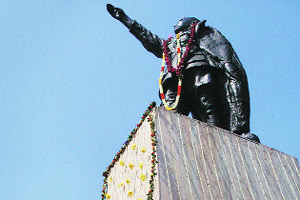 A Delhi-based NGO researching Netaji Subhas Chandra Bose’s disappearance for over a decade, on Wednesday urged the Centre for declassification of all documents and records relating to Netaji in national interest. “Our government does not want to release secret Netaji records for reasons of national security, but in national interest all these should be declassified and it is the demand of most of Netaji’s extended family members,” Anuj Dhar, a key member of NGO, Mission Netaji, and author of Back from Dead: Inside the Subhas Bose Mystery and India’s Biggest Cover-up, told PTI.

Azamgarh: The wait of 107-year-old Nizamuddin, who claims to be a close aide, guard and driver of Netaji Subhash Chandra Bose, could well be over as UP government has now initiated the process of giving him the status of freedom fighter. Born in Dhakwa village of Mubarkpur area in 1901, “Colonel” Nizamuddin was honoured on Wednesday by the DM of Azamgarh. According to Nizamuddin, his father Imam Ali used to run a canteen in Singapore, and at the age of around 24-25 he fled from his native village here to the country. At that time, Netaji was recruiting youngsters for his Azad Hind Fauj in Singapore and he also joined it, said Nizamuddin. Netaji was impressed with my dedication and later appointed me as his personal guard and driver and for the next 10 years I remained with him, Nizamuddin said. He returned to his village in Azamgarh with his family in 1969 and disclosed his identity only in 2001.

Kendrapara (Orrisa): Rare photographs of Netaji have been collected painstakingly for over three decades by a lawyer who idolises the freedom fighter and has turned his home into a private museum at Badahaat town in Kendrapara district. Netaji shaking hands with Adolf Hitler, his broadcast to the nation, his visit to the Cellular jail in the Andamans, getting the baton of the Indian National Congress president shipall figure in the collection of 45-year-old Mohammad Mustaque.
http://www.indianexpress.com/news/ngo-demands-immediate-declassification-of-all-netaji-documents/1064110/0

Email ThisBlogThis!Share to TwitterShare to FacebookShare to Pinterest
Labels: netaji